Wanting to enter this camp for fun.

Cup of Yogurt With a Green Hoodie

Still In The Game

Still In The Game

Hide And Go Deep
Yogurt Cup is a male contestant in Object Connects. He is a member of The Reversal Tomatoes from the start. Yogurt Cup, along with Lantern was added to the game by KirbyRider1337, who is the winner of Object Crossovers as a prize. Kirbyrider1337 will be providing the voice of Lantern as Yogurt Cup remains silent for the rest of the game.

Yogurt Cup is a beige colored Yogurt Cup with a dark green color inside. He also can be seen wearing a green hoodie.

In Attack Of The Reversal Tomatoes, Yogurt Cup received very major changes, comparing it to the first one. Yogurt Cup is now looking closer to an actual yogurt cup, while still retaining his green hoodie.

In Keep An Eye, Yogurt Cup recieves a new body design after the show moves to Animate. For starters, he returns back into his original design from episode 1 - 4 but the hoodie and colors come from episode 5. He's now a bit brighter and the outlines are a bit darker.

YC's the silent type. Sounds like another Teardrop carbon copy, no? Thing is... He's very smart, but his patience is a bit low. He'll start to make plans for a way through, but won't be too happy if it slips past everyone's cognition. However, as smart as YC is, he doesn't know for certain that Lantern's much, MUCH more than what he seems... 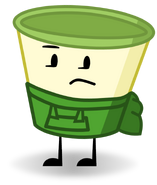 Add a photo to this gallery

Retrieved from "https://object-connects.fandom.com/wiki/Yogurt_Cup?oldid=3012"
Community content is available under CC-BY-SA unless otherwise noted.