N/A
The Sleepy Strawberries are one of the ten opposing teams in Object Connects. It was formed in What Camp: Part 1. This team is considered of two members from the start; Crane Flower (the leader) and Vanilla (the follower). 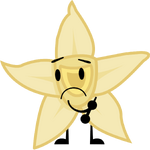 Vanilla (Follower)
Add a photo to this gallery

Add a photo to this gallery

Retrieved from "https://object-connects.fandom.com/wiki/The_Sleepy_Strawberries?oldid=1859"
Community content is available under CC-BY-SA unless otherwise noted.