7
Object Connects (formerly known as Project Duo) is an object show series created by PlanetBucket22, who's responsible for creating well-known series such as Object Crossovers! In fact, this serves as a spin-off to Object Crossovers! In this show, 20 anthropomorphic objects split into 10 groups of 2, compete for the chance to win 1,000,000 dollars by working together as a team until the finale.

On May 10, 2017, BucketStudio22 announced that he'll be making a brand new object show after he finishes making Object Crossovers! It was formerly called Project Duo (the name was not a offical name for the project). He also announced the first four contestants for Project Duo, and they are Circle, Journal (both of which have been appeared in the scrapped object show projects created by BucketStudio22), and two new characters that were created for this show; Cassette Tape and Vanilla.

On July 1, 2017, at the end of Object Crossovers 28A, PlanetBucket22 revealed two new characters; Flashlight and Toothbrush.

On November 1, 2017, PlanetBucket22 announces that two new characters, Lantern and Yogurt Cup, will be also joining Object Connects, and both of these characters were recommended by KirbyRider1337, the winner of Object Crossovers!.

Bocce Ball: A female crimson red bocce ball and a member of The Smarty Blueberries. A very strong and a very smart contestant but yet the most sympathetic and shy contestant in the game. A contestant who hates being overpowered and wanting to be friends with Stampy.

Cassette Tape: A male gray cassette tape and a member of The Firey Melons. He always complains about this show and the challenges the host was making every episode. His goal is to want everyone who watches Object Connects knows that the people with skill and intelligence will win competition shows like these.

Cotton Candy: A female pink flossed cotton candy and a member of The Punchy Mangos. She cares about herself, she can sabotage the competition in order to win the game. She wants to make sure that no one will mess with her hair

Crane Flower: A female plant and a member of The Sleepy Strawberries. A very positive contestant who refuses to say no and tries to calm Vanilla down. However, removing her leaves like arms are her weakness and stealing them from her causes her to have no other choice but to serve.

Flashlight: A female violet plastic flashlight and a member of The Happy Berries. A nervous, metallophobe contestant who sneezes every time she's near any type of metal. She's most likely to stay away from Toothbrush because of his annoyance.

Slimey: A male green slime and a member of The Noisy Gooseberries. A very gimmick contestant who can turn shapes and change colors. He's Circle best friend and he wants to make sure that he doesn't get eliminated early so they will be in the Final 2.

Thing: A male member of The Speedy Dragon Fruits. A very smart, very talented but a very weird looking object who tries to outsmart others so he can make it to the finals making him the biggest threat in the game. However, due to his size, intellect, and design, he always gets picked by other contestants.

Vanilla: A female beige colored vanilla flower and a member of The Sleepy Strawberries. She has two personalities, but one personality will be taking over the body depending on the vehicles she's at now known as The Mighty Vanilla.

Walkie-Talkie: A male black walkie talkie and a member of The Smelly Peaches. A strong, loudmouth, easy preferring soldier who likes to give others and create and find new ways to win the challenges. However, he can be stubborn, selfish, and caustic about the work he makes and keeps implying that it's not going to work. 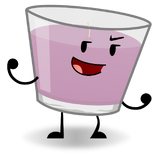 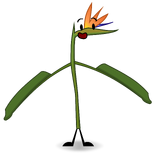 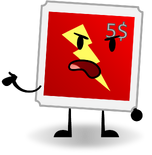 It's unknown how many episodes will be produced, but it yet it has been speculated that there will be at least 24 episodes. Each episode ranged at around 10 - 25 minutes while the very first episode will be spit into two parts.

Logo
Community content is available under CC-BY-SA unless otherwise noted.